GE’s towering turbine had produced its first power three weeks before its official launch, reaching full power soon afterwards, and the first nacelle had achieved the same milestone even earlier, still in the factory.

In mid-December, the 24-hour yield record stood at 260MWh, representing more than 90% of maximum production if the turbine had continuously run at full power (12MW).

Apart from the enhanced overall dimensions, the Haliade-X’s visual appearance differs in several aspects from the Haliade 150-6MW predecessor, which GE acquired as part of the deal to take over French conglomerate Alstom’s power and grid division.

Prominent Haliade-X features include the new box-type nacelle shape and an enhanced permanent magnet generator (PMG) with a diameter of around 10 metres.

A distinct and rather unusual drivetrain feature of the smaller 6MW direct-drive model —with around 75 units operational — is its pure torque (PT) system.

This comprises a hollow stationary shaft [pin], a rotor hub with two taper-roller bearings, and flexible torque arms with a hydraulic load-balancing system that connects the hub and the generator-rotor.

The latter runs at its own bearing, and the aim of the overall PT concept is to maximise air-gap stability under load. 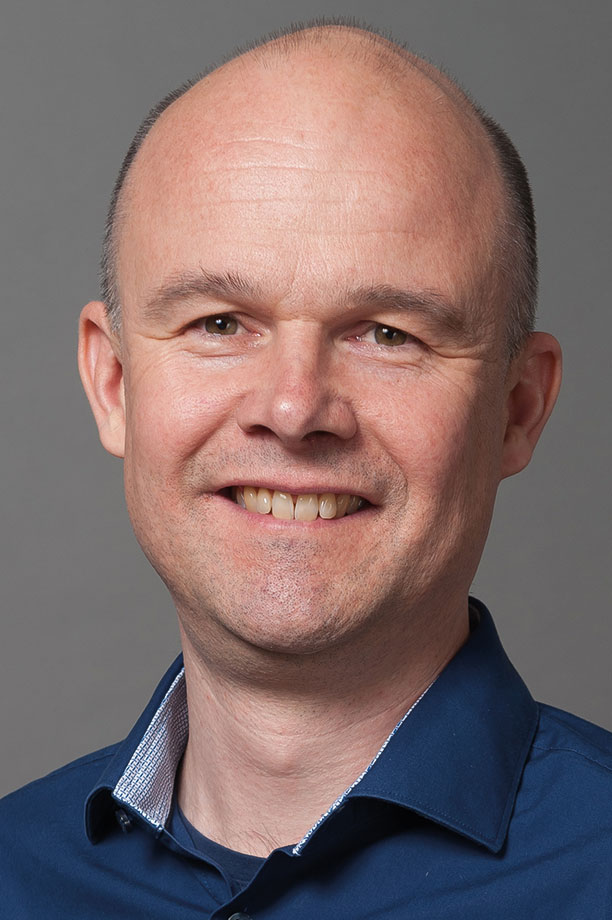 As the PT principle had originally been designed to prevent harmful non-torque loads entering the gearbox of geared turbines, an adapted solution for direct drive was reintroduced in the Haliade 6MW in 2012, focused on air-gap stability, explained Vincent Schellings, GE’s offshore chief technology officer (right).

The external shape of the hub cover (spinner) suggests that GE retained the PT principle for the Haliade-X, but Schellings explains this is not the case: “With the Haliade-X, we reuse the proven 6MW concept with two tapered roller bearings on a pin, but differently.

“The move to a new solution allowed significant mass reduction in this specific part of the drivetrain design. Most importantly, the new bearing configuration provides similar airgap stability as with PT.

“Above all, it shows there are different solutions that can provide similar airgap stability, one of which is used for the Haliade-X.”

The 6MW ring generators initially had issues with magnets breaking loose, highlighted by a former GE offshore-wind manager in late 2015 during an interview with the author.

He said several glue experts had been called in to find the root cause and develop a solution to resolve the problem.

Schellings added to the explanation that reliability performance was further enhanced by moving from a manual to an automated gluing process, which is more efficient and provides better quality control.

“With the Haliade-X we moved away from gluing magnets to mechanically containing them as this provided an opportunity to build generators more power-dense, resulting in lower generator mass,” he said.

For proprietary reasons, he would not disclose other specific Haliade-X generator details, like whether it is a segmented design or a more conventional single-piece electric machine, or technical aspects such as operating voltage.

Asked why GE chose direct drive for the Haliade-X, Schellings — who in the past was closely involved with GE’s offshore-dedicated geared 3.6MW as well as the direct-drive GE 4.1-113 and most recently the Haliade 150-6MW — said: “When reviewing all key aspects, but especially the levelised cost of energy [LCoE], reliability and scalability, we consider direct drive the right design for large-scale offshore turbines.

“The integral wish to build on the 6MW Haliade track record played an important role in this decision, and it also contributes to derisking the technology.”

Commenting on the challenges linked to developing such a huge turbine and generator, Schellings said that while the development built on experiences gained with the 6MW Haliade, it also provided an opportunity to create something new and on a much larger scale.

“When building a 12MW turbine with matching generator, every new process step represented a fresh challenge, from the early design stages to manufacture, handling and operating the turbine for the first time.”

Looking back, he thinks the size of components was perhaps the single biggest challenge during product development, pointing to the blades as a key example.

These are so large that several parts are taller than an average person, requiring a major rethink on manufacturing and handling methods. 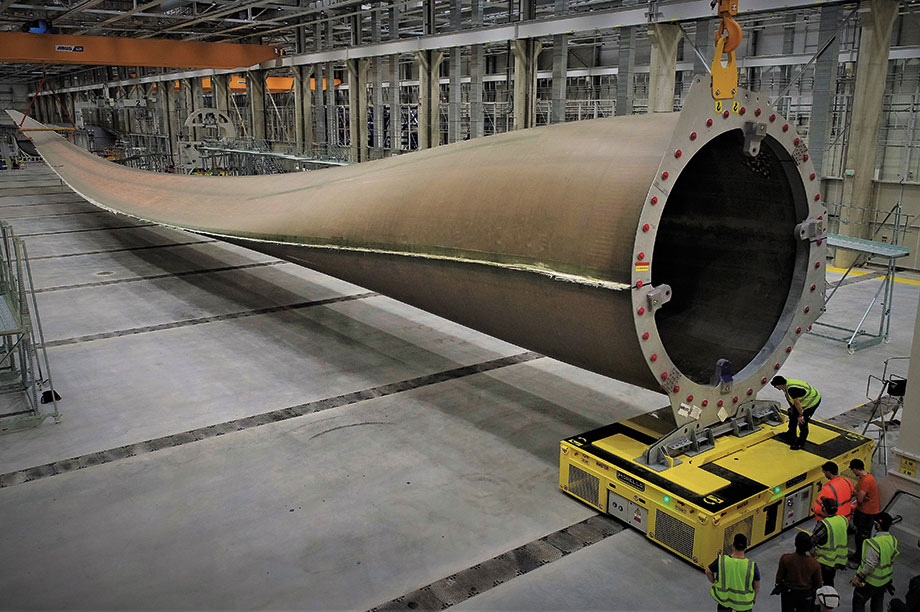 Another consequence of the sheer size of components was the need for much higher levels of automation during manufacture and to tailor design choices towards optimising serviceability.

These go hand in hand with the introduction of new tools such as virtual reality to find out how service technicians work and identify the best ways to perform specific O&M activities.

“To ensure that any highly complex issues would not create delays, we also assembled a team of experts from across GE’s global businesses who can be called in on short notice for brainstorming and to find specific solutions.”

Such experts act as chief engineer advisers when reviewing a given design.

The Haliade-X 12MW is the first product of a new modular platform GE announced during the 2018 launch.

Future scaling will require ongoing technology development, which is an integral part of GE’s long-term platform strategy, according to Schellings.

But the current focus is on making this 12MW model a success.

“We’ll see what the future brings regarding technology developments and potential turbine improvements. This fits into our plans to enter China’s high-wind market, with Haliade-X turbines made in a local facility,” he added.

GE’s initial market focus for the Haliade-X will be key IEC I wind markets, for which Schellings considers the turbine, with its 316W/m2 specific power rating, a highly competitive offering.

For other main markets, some fine-tuning could potentially offer additional benefits, he said, but that it is not GE’s focus during this initial product launch.

The near future will focus on testing, at component, system and full-scale level, with the prototype in Rotterdam and highly accelerated life testing (HALT) on the ORE Catapult full-scale nacelle test rig.

When leading the 4.1-113 direct-drive product development in 2010/11, GE offshore CTO Vincent Schellings said in an interview with Windpower Monthly that it could cut LCoE by up to 8% compared with geared solutions.

Also, additional downtime and health and safety risks during offshore oil transportation and handling must be considered.

The service concept for the 4.1MW model read: “The unit should not trip!” The current motto is “Stay Ashore!”

“This is basically the same philosophy with a different name,” said Schellings. “We launched it last year together with ORE Catapult (UK) as an initiative to avoid service personnel spending unnecessary time offshore for turbine O&M.

This programme is built on three pillars: reliability, remote operability and robotics. The key goal is to minimise the hours people spend at sea, to reduce health and safety risks as well as LCoE.”

Unlike with the Haliade 6MW, the two converters and MV-transformer are located inside the nacelle to allow pre-commissioning inside the factory and reducing power transport losses down the tower. 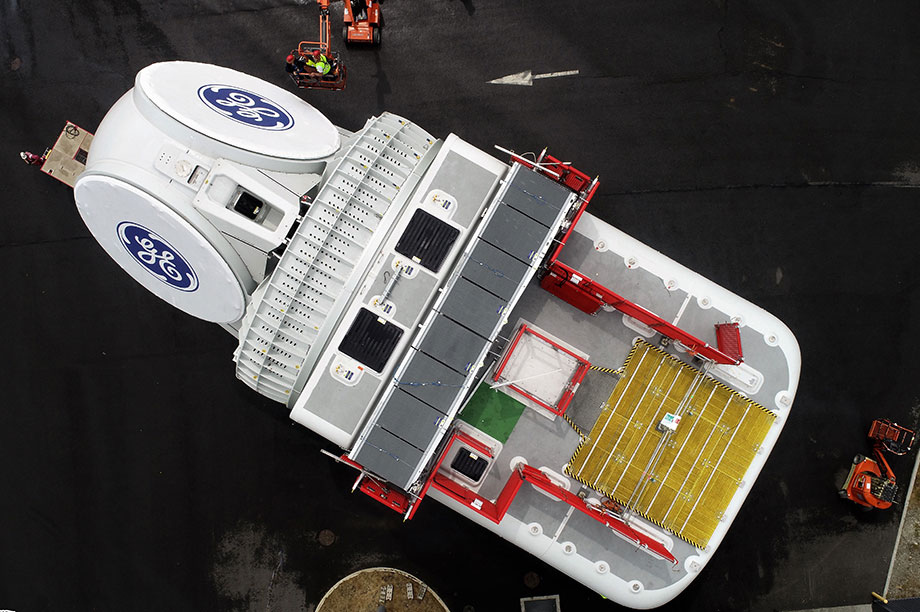 The Haliade-X’s rated rotor speed is 7.81rpm, which corresponds to 90m/s rated tip speed based on a 220-metre rotor diameter and a state-of-the-art value for modern offshore wind turbines.

“We do feel that this chosen tip speed offers a good balance between aerodynamic performance and the risk of leading-edge erosion,” Schellings said.

Artículo anteriorShould You Use Instagram To Promote Your Business? | Adam Erhart