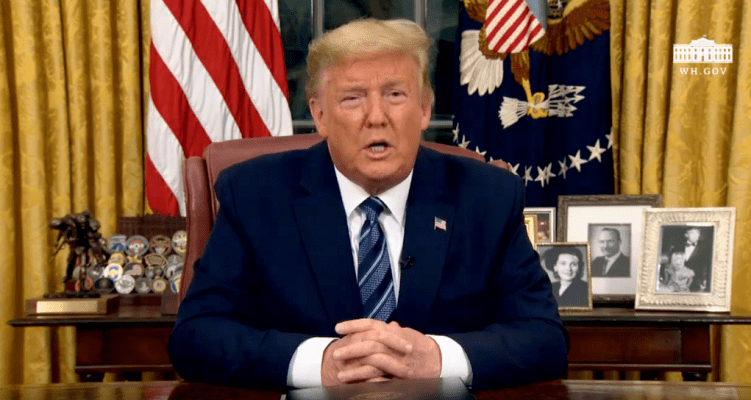 In a Wednesday evening address from the Oval Office President Donald Trump announced that the U.S. would issue a thirty day travel ban for travel from the European Union. He is also looking to Congress, the Small Business Administration and the Treasury Department to take steps to stimulate the U.S. economy.

The steps are the latest effort by the government to tamp down on the spread of COVID-19.

“We will be suspending all travel from Europe to the United States for the next 30 days,” President Trump said, adding “the new rules will go into effect Friday at midnight. These restrictions will be adjusted subject to conditions on the ground. There will be exemptions for Americans who have undergone appropriate screenings. And these prohibitions will not only apply to the tremendous amount of trade and cargo.”

This travel ban was issued as an executive order signed earlier today, according to a statement from the Department of Homeland Security.

According to the statement:

“…President Donald J. Trump signed a Presidential Proclamation, which suspends the entry of most foreign nationals who have been in certain European countries at any point during the 14 days prior to their scheduled arrival to the United States. These countries, known as the Schengen Area, include: Austria, Belgium, Czech Republic, Denmark, Estonia, Finland, France, Germany, Greece, Hungary, Iceland, Italy, Latvia, Liechtenstein, Lithuania, Luxembourg, Malta, Netherlands, Norway, Poland, Portugal, Slovakia, Slovenia, Spain, Sweden, and Switzerland. This does not apply to legal permanent residents, (generally) immediate family members of U.S. citizens, and other individuals who are identified in the proclamation.”

In addition to the travel ban, which does not include the United Kingdom, the President said that he would be authorizing the Small Business Administration to issue some $50 billion in loans to compensate businesses whose income is impacted by efforts to respond to the coronavirus outbreak. Congress would need to approve the funding boost.

That move should allow for more companies to compensate workers for time spent in quarantine if they, or their family members are ill.

Additionally, the President said that he would instruct the Treasury Department to defer tax payments without interest or penalties for individuals and businesses that are negatively impacted by the disease.

“Using emergency authority, I will be instructing the Treasury Department to defer tax payments, without interest or penalties, for certain individuals and businesses are negatively impacted. “ President Trump said. “This action will provide more than $200 billion of additional liquidity to the economy.”

Furthermore, the President issued a call to Congress to eliminate payroll taxes as another step to cushion the economic blow of a more aggressive response to the COVID-19 outbreak in the U.S.

These unprecedented steps follow a tumultuous day on Wall Street and the wider world as the World Health Organization officially declared the COVID-19 outbreak a pandemic and stocks again suffered massive losses in trading on Wall Street.

As notable as the European travel ban is (and as inexplicable as the exclusion of the U.K. may be), the President’s speech drew criticism for the things it did not include. Nicholas Burns, the former U.S. Under Secretary of State for Political Affairs under President George W. Bush, wrote, “COVID-19 is not a ‘foreign virus’. It is a global threat that can only be resolved by working with, and not against, all the other nations of the world.”

Missing in President Trump’s speech—any responsibility to work with other countries to limit the twin crises, health and economic, from COVID-19. He should close ranks to work with China, Japan, South Korea, Europe+Iran. Instead, he thinks we can dig a moat around America.

And while the President issued assurances that the government was well-prepared to meet the challenge that the spread of COVID-19 poses, recent reporting indicates that critical components for the COVID-19 test are facing shortages and there’s still not enough testing being done.

Johns Hopkins University is currently tracking 1,281 people who have been infected with the disease in the U.S. and that number is likely to increase as more tests are conducted. So far, 36 people in the U.S. have died of the illness.

“The virus will not have a chance against us. No nation is more prepared, more resilient than the United States,” the President said.

Artículo anterior4 Strategies to Make Your Sales Funnels Convert in 2020