Hooq, a five-year-old on-demand video streaming service that aimed to become “Netflix for Southeast Asia,” has shut down weeks after filing for liquidation and terminated its partnerships with Disney’s Hotstar, ride-hailing giant Grab, and Indonesia’s VideoMax.

Hooq Digital, a joint venture among Singapore telecom group Singtel (majority owner), Sony Pictures, and Warner Bros Entertainment, discontinued the service on Thursday. It had amassed over 80 million subscribers in nearly half of the dozen markets in Asia.

“For the past 5 years, we gave you unbelievable thrills, heartrending drama, roaring laughs, awesome action, and more. Our goal was to bring you the best entertainment from here to Hollywood. Our hearts are full of gratitude for all of you who shared the journey with us,” it says on its website.

Hooq publicly disclosed that it had raised about $95 million, but the sum was likely higher. News outlet The Ken analyzed the regulatory filings last month to report that Hooq had raised $127.2 million, and its losses in the financial year 2019 had ballooned to $220, suggesting that it had received more capital.

The streaming service said last month that it could not receive new funds from new or existing investors. 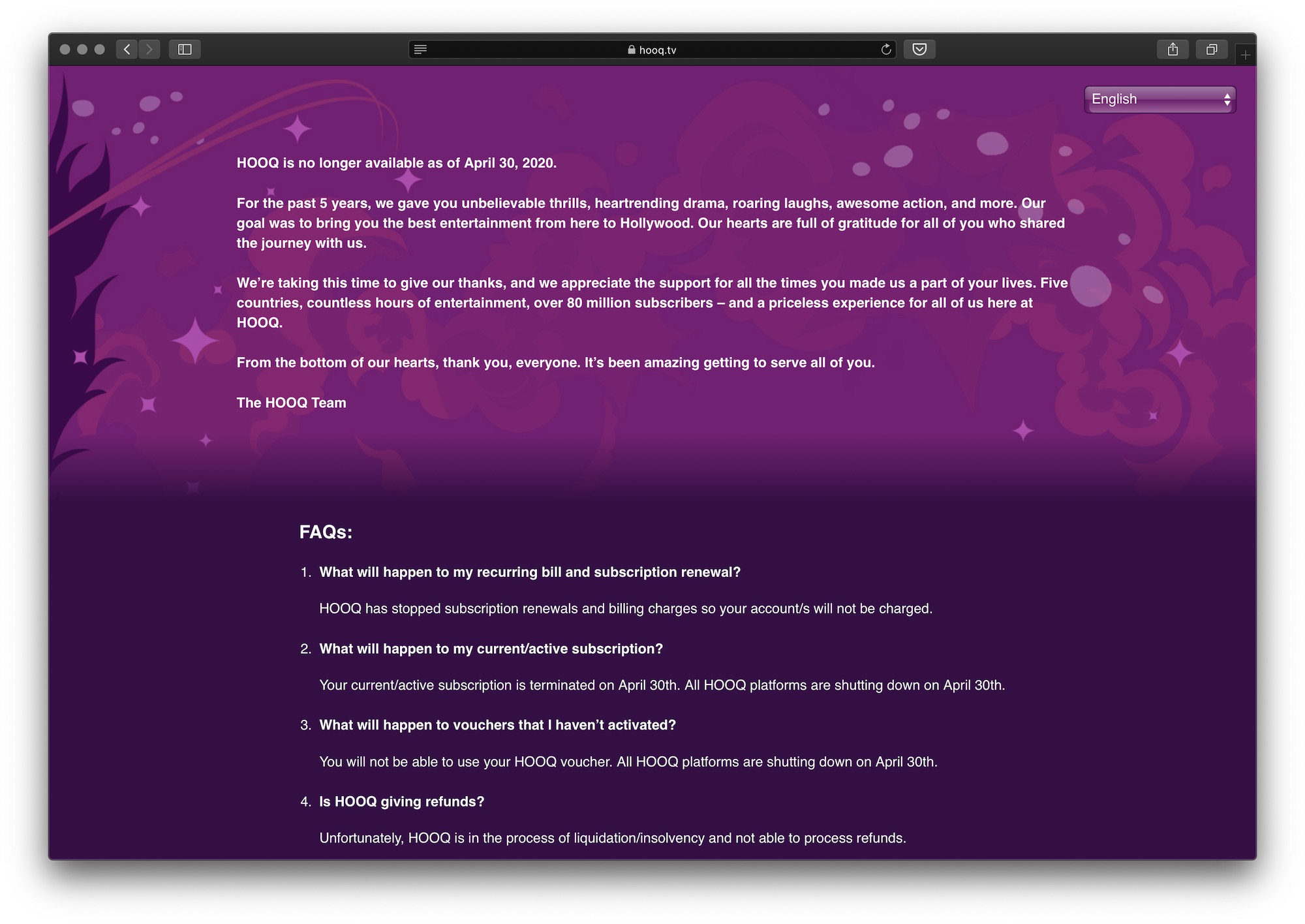 The service counted India, where it entered into a partnership with Disney’s Hotstar in 2018 and telecom operators Airtel and Vodafone, as its biggest market. The company also maintained a partnership with ride-hailing giant Grab to supply content in its cab, and VideoMAX in Indonesia.

Hooq brought dozens of D.C. universe titles including “Arrow,” “The Flash,” “Wonder Woman” and other popular TV series such as “The Big Bang Theory” to its partners. In India, users began noticing last week that those titles were disappearing from Hotstar.

A spokesperson of Hooq told TechCrunch today that its tie-ups with all its partners including Hotstar have closed. A Hotstar spokesperson did not respond to a request for comment.

Mobile operator Singtel first unveiled Hooq’s liquidation in an exchange filing last month. The Ken reported that the filing left hundreds of employees at Hooq stunned who thought the firm was doing fine financially. Nearly every employee at Hooq has been let go, with select few offered a job at Singtel, according to The Ken.

In an interview with Slator earlier this year, Yvan Hennecart, Head of Localization at HOOQ, said that the company was working to expand its catalog with local content and add 100 original titles in 2020.

“Our focus is mostly on localization of entertainment content; whether it is subtitling or dubbing, we are constantly looking to bring more content to our viewers faster. My role also expands to localization of our platform and any type of collateral information that helps create a unique experience for our users,” he told the outlet.

Artículo anteriorFree Webinar | May 13: How to Create Massive Leads and Sales in an Ever-Changing World