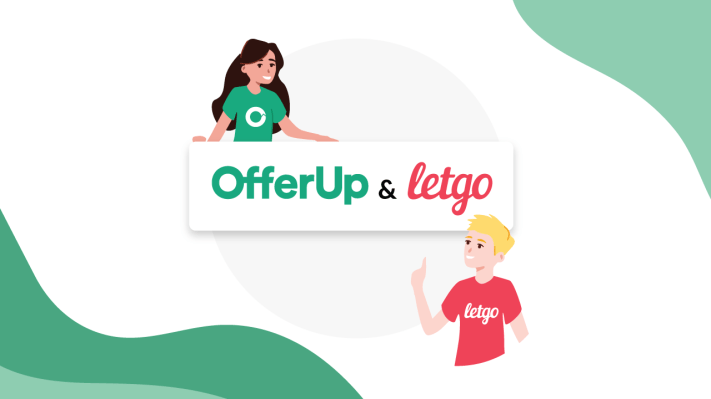 Earlier this year, online marketplace OfferUp raised $120 million and acquired a top competitor, letgo as a part of the fundraise led by letgo’s majority investor, OLX Group. As a part of the deal, OfferUp said it planned to eventually combine the businesses’ respective marketplaces into one but didn’t get into specifics of how that merger would take place. Today, OfferUp says it has now combined the OfferUp and letgo marketplaces into a new app and explained how the transition will work for former letgo users.

The newly combined OfferUp and letgo application is available across both iOS and Android, and expands the number of deals, buyers and seller, by naturing of its combined communities. With the expansion and merger, users on the new marketplace will also gain access to features like nationwide shipping and OfferUp’s safety programs like TruYou and Community MeetUp Spots. In addition, the listings on the app will never expire, though letgo had expired them after 30 days.

Existing letgo users will be directed to download the new OfferUp & letgo app, then use their letgo sign-in information to create their new OfferUp account. When they sign in, their account’s reputation, including their ratings, sales and purchase history, and join date will transfer from letgo to OfferUp.

However, items users had listed on letgo will not move over to OfferUp. Instead, they’ll need to be reposted. For customers who were in the middle of transactions, the company is offering a website legacy.letgo.com where those transactions can be completed. This site will be shut down after September 21, so it’s being advised that all parties quickly complete their sales.

As a result of the merger, customers with an active subscription to Super Boost Mode on letgo will have that subscription automatically cancelled. They can choose to use OfferUp’s Promote Plus service instead, but won’t be automatically signed up or opted in.

There will be some other differences between the two marketplaces that letgo users should understand. While the merger does bring nationwide shipping to former letgo users, it also means that some of letgo’s categories are no longer supported. These include jobs, services, rental listings and gift cards.

In addition, letgo won’t be supported in Canada due to the merger and OfferUp hasn’t yet reached Canada either. That means the company will lose some number of Canadian users as a part of the deal.

At the time of the deal, letgo brought to the table an app that had over 100 million worldwide downloads, so there is potential for at least some portion of its lapsed users to reactive their accounts upon their next launch. The two apps had also been neck-and-neck in terms of their App Store category rankings before the acquisition, though the iPhone version of OfferUp had a slight lead.

As of yesterday, OfferUp was still ahead with a ranking of No. 4 in iPhone’s Shopping category, compared with letgo at No. 12, per data from Sensor Tower.