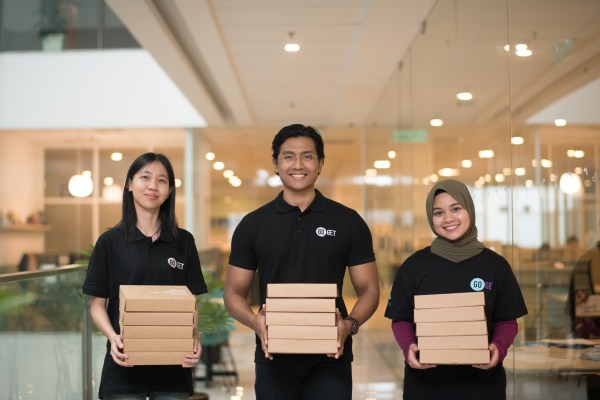 GoGet, a Malaysian on-demand work platform, announced today that it has raised a $2 million Series A led by Monk’s Hill Ventures. The platform currently has 20,000 gig workers, who are called “GoGetters,” and has onboarded 5,000 businesses, including Lazada Malaysia, IKEA Malaysia, Foodpanda and flower delivery service BloomThis.

While Malaysia has other on-demand work platforms, including Supahands and Kaodim, each has its own niche. Supahands focuses on online tasks, while Kaodim offers professional services like home repairs, catering and fitness training. GoGet is more similar to TaskRabbit, with GoGetters performing errands or temp work like deliveries, moving large items, catering at events, data entry and office administration.

Chief executive officer and co-founder Francesca Chia founded GoGet in 2014. The startup decided to focus on gig workers because there is a labor gap in ASEAN (Association of Southeast Asian Nations) countries, she told TechCrunch.

“Today, the majority of ASEAN’s labor market are low- to middle-skilled, and the majority are not protected with job security, future career paths and financial services such as insurance and savings,” she said. “At the other end of the spectrum, over 70% of employment in ASEAN are from SMEs, who seek to scale without scaling full-time costs, and find it difficult to train and maintain a reliable pool of staff.”

GoGet wants to bridge the gap by connecting businesses with verified flexible workers, she added. GoGetters are able to switch between different categories of work, which Chia said gives the ability to learn new skills. Companies are provided with management features that include the ability to create a list of GoGetters they want to work with again and tools for recruiting, training and payment.

The Series A will be used to expand GoGet in Malaysia. One of the things many companies whose business models revolve around the gig economy need to grapple with as they scale include workers who are frustrated by uneven work, low pay and the lack of benefits they would receive as full-time employees. In California, for example, this has resulted in a political battle as companies like Uber, DoorDash and Lyft try to roll back legislation that would force them to classify more gig workers as full-time employees.

Chia said GoGet’s “vision is to bring flexible work to the world in a sustainable manner.” Part of this entails giving GoGet’s gig workers access to benefits like on-demand savings and insurance plans that are similar to what full-time employees receive. GoGet’s platform also has career-building features, including online trainings and networking tools, so workers can prepare for jobs that require different skill sets.

While GoGet’s short-term plan is to focus on growth in Malaysia, it eventually plans to enter other ASEAN countries, too.

In a press statement about the investment, Monk’s Hill Ventures co-founder and managing partner Kuo-Yi Lim said, “The nature of work is being redefined as companies and workers seek both flexibility and fit. This trend has been accelerated by the pandemic, as businesses are transforming in response and require more elastic workforce. GoGet provides a community of motivated and well-trained workers, but more importantly, its platform extends the corporate people management systems to ensure quality, compliance and seamless workflow.”

Artículo siguiente Lessons From a Viral LinkedIn Post: Authenticity Is More Important Than Ever