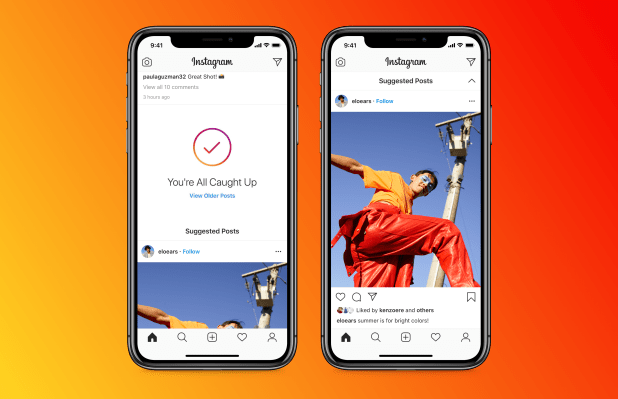 Instagram has found a new place to display ads: at the end of your Feed. The Facebook-owned app in 2018 introduced a feature that will alert users when they’ve scrolled through all the new content in their Instagram Feed, with a notice reading “You’re All Caught Up” that appears on the screen. Now, Instagram says it will use this space to suggest new, organic posts for users to view as well as ads.

The original idea behind the “You’re All Caught Up” notice was to help curtail overuse of Instagram’s addictive, social app. At the time, the feature was one of several Facebook had implemented to provide insights into screen-time usage, having arrived alongside dashboards that would help people see how much time they they’ve spent in Facebook and Instagram’s apps, daily reminders when you hit your total time for the day, and tools for silencing notifications.

The changes were part of a larger movement in tech that questioned if social apps had been built to become too addictive, which could have negative consequences on users’ mental health. Around this time, Google and Apple released their own screen time management tools, and YouTube rolled out features to track time spent watching videos and reminders that encouraged users to take a break.

In more recent months, the growth of the addictive, Chinese-owned social video app TikTok in the U.S. combined with a global pandemic has seen many people backtracking on their earlier self-imposted screen time limits. This, in turn, may have pushed Instagram to roll back its own efforts in screen time management, too.

A chief rival to Facebook’s social dominance, TikTok has already been slammed for being too addictive, thanks to its advanced algorithms quickly learn what sort of content holds users’ attention then uses that information to personalize users’ feeds. With its short-form content and quick-fire interface, TikTok users are finding themselves spending an increasing amount of time in the app. According to data from 2019, the average U.S. TikTok user opened the app 8 times per day, and spent 46 minutes, on average, viewing its content. Newer reports says this number has increased to 52 minutes per day, and one recent study found that younger users may be spending as much as 80 minutes per day in the app. It’s no surprise, then, that Instagram may now be reconsidering its decision to push users to stop scrolling and leave its app.

“Our goal is to make it clear when you’re all caught up so you can decide how you want to best use your time,” says Instagram Director of Product, Robby Stein. “We see people continuing to seek out more posts they’re interested in after catching up with their feeds, so we wanted to learn from that and make it easier to go a little deeper for those who choose to do so.”

The increased ad space is the more significant impact, from a business perspective. But Instagram’s decision to dial back its digital well-being efforts could have longer-term impacts to its app and the larger screen time movement in general. Already, many parents have ditched their children’s screen time limits amid coronavirus lockdowns, and many adults are finding themselves online more often these days, as well. Some experts even argue that online networking has increased value in our socially-distanced world. These new attitudes could lead to Instagram’s “Suggested Posts” feature being launched with little to no backlash.

Instagram says the feature is rolling out now, globally.

Artículo siguiente Student get 60% off passes to Disrupt 2020