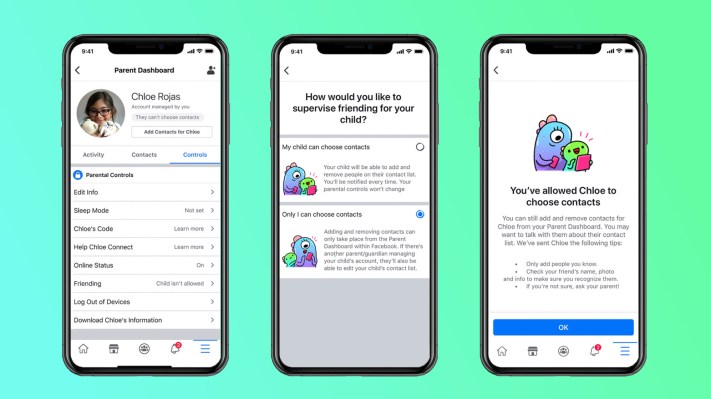 Facebook announced the launch of Messenger Kids in more than 70 new countries and new features that will gradually roll out in different markets. As schools around the world remain closed because of the COVID-19 pandemic, the new features are designed to let kids increase their contacts on the app under parental supervision.

The second new feature allows parents to approve other adults, like teachers, to add their kids to group chats. The third feature, now available in the U.S., Canada and Latin America, allows parents to make their child’s profile name and photo visible to a circle of users that includes friends of their kids’ contacts and their parents, children of parents’ Facebook friends who also have Messenger Kids, and the children of people parents invite to download the app.

In its announcement, Facebook said the new features were developed with its Youth Advisors, an advisory group made up of child development, media and online safety experts. In February, the company introduced new tools and features that give parents more control over their children’s activity on Messenger Kids, including an activity log that makes it easier to see who they are chatting with and what they are sharing. But, as TechCrunch’s Sarah Perez noted, Facebook’s privacy policy still gives the company plenty of room to collect personal data.